Bonjour! Buongiorno! I’m so excited to catch up on the past couple months of travel, races, product obsessions and more. As (probably all of) you might know, I just got back from lots of traveling, from Vegas to NYC to Europe! Today I’m gonna dive into the biggest trip — Europe (obvi).

My mom had never been to Europe before this, and I had only been to Paris — almost 10 years ago! It’s kind of insane to write that . . . I feel old. Anyway, this was a huge deal for both of us, and the longest vacation either of us have ever taken. We went to London, Paris, Nice, and Rome. I know. Amazing.

I’ll get into recommendations, restaurants, and touristy specifics in a breakdown of each country, but wanted to give a brief overview of our trip’s outline and specifics. It was the adventure of a lifetime, and I’ll cherish it for the rest of my life. Here’s how we got in, got around, saved some money (like barely though), and a few highlights. xx.

We got an exceptional flight deal with British Airways via AmEx travel. I’ve been a big AmEx evangelist (lol) and proponent of their services for about 7 years now — and I still am! AmEx travel helped us book seamlessly and I got tons of points for going on a vacation I was already going to go on.

We booked about 9 months in advance and got two round trip tickets from LAX to LHR for under $500 each … no I’m not kidding! The return was nonstop, but our inbound flight had a brief layover in PHX. Overall it was super.

Our inbound flight was a little rough; we got an older airbus and had some check-in issues so ended up getting terrible seats and were super crammed (and this chick spilled red wine all over me but it’s fine I didn’t cry) — also nowhere to charge devices, no wifi, etc — but the return flight was FAB. Like honestly so lovely. Big big fan of British Airways and their multiple-meals-and-snacks-included philosophy. I just like really identify with that kind of business model you know?

For intercountry transit, we used Eurostar (the Chunnel) to get from London to Paris, AirFrance to get from Paris to Nice, and Vueling to get from Nice to Rome and Rome to London before we headed back to the states. Here are some brief thoughts on each: 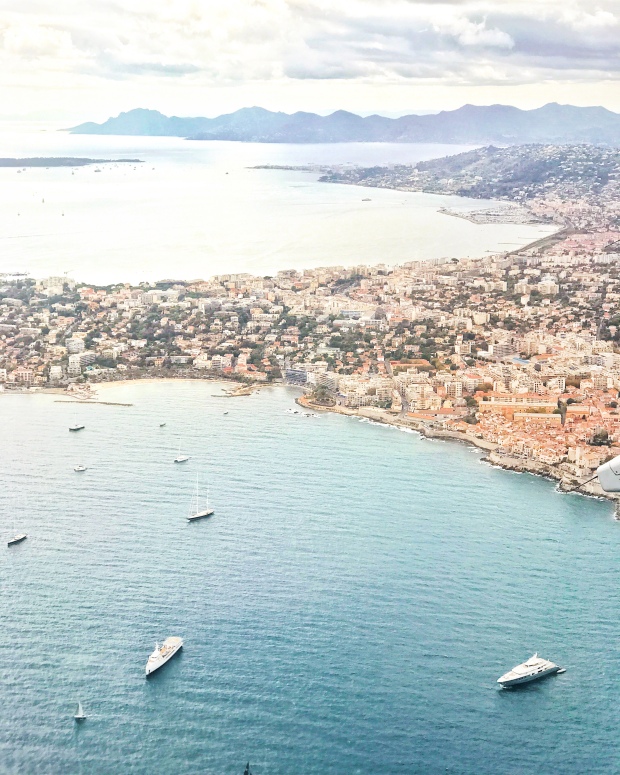 The Chunnel (Eurostar): Quick, efficient, clean, has (somewhat spotty) wifi, places to store luggage, easy to fall asleep for a couple hours and wake up in a new country. We paid about $60 or $75 per ticket. Easier to deal with than airports. Customs leaving London was literally someone just looking at your passport and waving you through — no passport stamps coming into France, though! You just get a “leaving London” stamp. If this is important to you, maybe ask for a stamp or consider a hopper flight.

Air France: Can I just say that one of the nicest people I met in Europe was the sweet woman who worked at the Paris Air France office? Not only did she not laugh at my VERY rusty French, but she encouraged me to keep speaking (by not switching to English immediately, haha), helped me brush up, gave me recommendations to a beautiful cafe (even went so far as to look up their hours, address, etc, and then write it down for me), and told us about the (very inexpensive) shuttle bus from L’Arc de Triomphe to Orly airport. I love her.

The flight itself was efficient, on time, clean, free drink service, no carry-on fees, super kind staff … I remember when we deplaned my mom was thanking the staff for being so much better than the American airline companies. We had a great experience with Air France and our flight from Paris to Nice was around $60. For reference, my Uber in August from NYC to JFK was $60.

Le Bus Direct: The aforementioned shuttle bus to Orly was clutch. It goes from the city to both CDG and ORY for under $15 (one way ticket). If you’re in Paris and need a lift to the airport, this is a great option.

Vueling: So this was the cheapest of all the flights (I think they were like $20 each way or something insane like that), but also kind of the worst airline. Not like TERRIBLE but the toilets were worse than a gas station, the service is slow (and not free), and our flights were both very, very delayed with no communication around the delays. Like I said, not the worst of all time, just not as nice as everything else we experienced. I also read like several horror stories on Tripadvisor so like buyer beware?

In London and Paris we used public transportation. There were a couple Ubers sprinkled in (RIP Uber London), but for the most part we used the Tube in London and RER/Metro in Paris. Rome was a totally different story — we were in the center of all the touristy things so we literally walked EVERYWHERE. My body hurts. Cobblestones and Stan Smiths don’t mix. We found it very, very easy to get around with the trains in the first two cities, and almost everything in Rome is completely walkable as well. Saves ya some money, too.

I’d recommend getting an Oyster card in London, and a 3-5 day pass in Paris. Caveat to the pass in Paris is that the tickets are tiny so don’t lose them.

Aside from staying with one of my BFFs (hey Amanda) in London (which was not only clutch AF but also a long overdue sleepover with one of my besties), we did Airbnb in Paris and Rome, and a hotel in Nice. We really lucked out with our location for all three — we were in the 1st arrondissement in Paris, next to the Pantheon in Rome, and I scored a killer deal on a night at Hotel West End in Nice which gave us views like this:

Highly, HIGHLY recommend this hotel. The view of the Hotel Le Negresco is iconic (and it’s significantly less expensive than actually staying AT Le Negresco, while still being very, very nice).

So as per usual, I overpacked in some areas. Here’s what I got right:

OK so I’m going to do a full breakdown of restaurants, activities, etc in individual city/country posts, but real quick, some of my favorite memories: Harry Potter Studio Tour at the WB lot and Dishoom for the most phenomenal Indian food in London; Laduree tea rooms and the sparkling Tour Eiffel in Paris; the stunning skyline and view from the Hotel West End in Nice (and the crazy-good pan bagnat), and getting five scoops of gelato from Giolitti after seeing Pope Francis in Rome.

—
I can’t wait to share more from our travels with you guys later this week! I hope this was helpful for any upcoming travel you might have planned, or if you’re dreaming of a European getaway, I hope this helps get you started! Any questions? Leave some comments for me :)

meet brava: the tesla of easy bake ovens (or something like that) 🥘